Genomics industry professionals working in the USA are the highest paid in the world and their UK colleagues earn on average less than half as much. This was one of the most striking findings from the second annual Genomics Industry Workforce survey report published this week by Front Line Genomics and Paramount Recruitment. 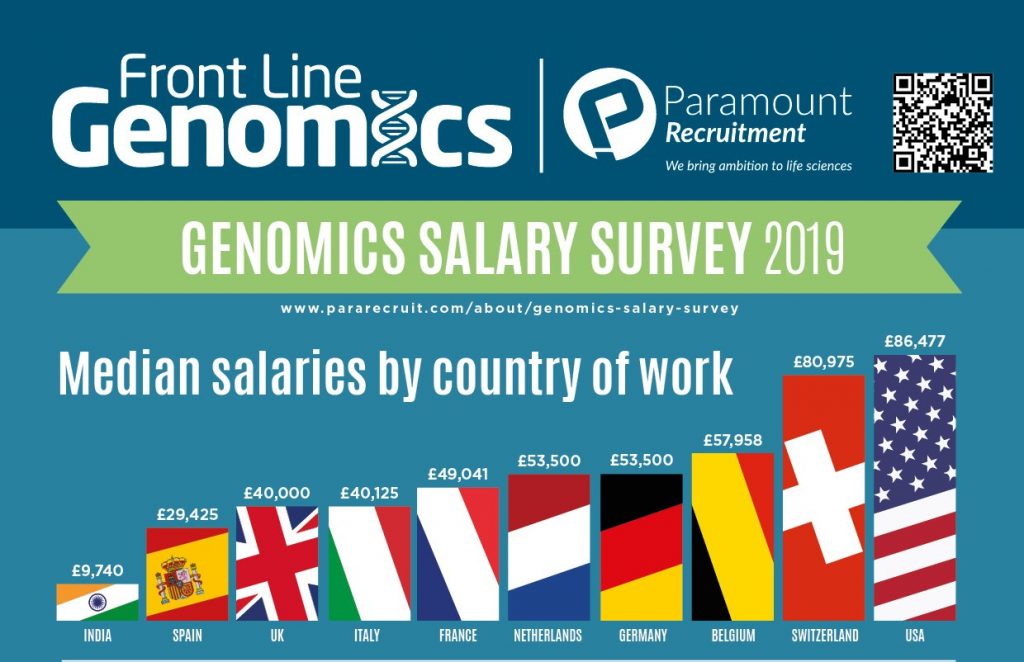 The median salary for genomics industry workers within the USA is $110,000 (£86,477) while the median salary in the UK is just £40,000.  The gap between the USA and UK professionals has increased since last year’s survey, assisted in part by the worsening pound/dollar exchange rate.

The Workforce insights survey compiled responses from 1,283 professionals currently working in the Genomics industry in 62 countries worldwide.   The key highlights of the survey were provided to all attendees at the London Festival of Genomics last week.

The survey showed that the highest median average salary is received by genomics professionals in the USA followed by Switzerland (£80,975).  We then see a significant drop of over £20k between these and the next group of countries with Belgium third at £57,958, Germany and the Netherlands at £53,500 and France at £49,041.

While the median salary in the UK has grown by approximately 5% since last year’s survey, the gap between the UK and other countries has continued to increase (partly impacted by the worsening exchange rate of the GBP versus the dollar and euro).

“Last year’s survey highlighted the huge pay gap between US salaries and those in the UK. This year we see this gap continuing to grow and an increase in median salaries within other European countries. With the type of work undertaken similar in most countries around the world, UK scientists and bioinformaticians could be tempted to look at the feasibility of relocating abroad – and this is of concern to UK based genomics businesses.”

The full report of the survey provides some fascinating details including the gender pay gap in the UK, average salaries earned within each function/role, the average pay rise anticipated this year and the future demand for each key skill area within genomics.

The report is available for free upon request through the Genomics Salary Survey page on this website.